So many have asked me for the highlights from my talk that I figured it was an important talk to write down since I had the outline in index cards, I can recreate it.

I have had a few firsts at this church.  My first lecture was here so it seems fitting the first lecture after being Ordained that I would first speak as Rev. Colleen Kulikowski.

I stand here today compelled to share with you the importance of voting and the part we play in the world around us.  It wasn’t all that long ago that women gained the right to vote.   I am struck by those that stood before me giving equality to all of us.   Their sacrifices ensure we today are equal.   Around the world it is not necessarily so. 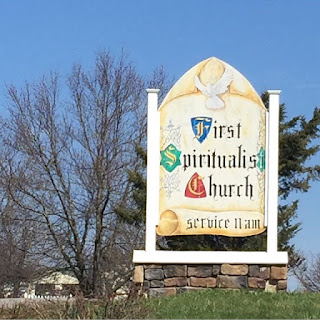 I have to share with you my first talk at the Lily Dale Assembly.   It was a day that I was going to support my mentor, Jack Rudy who was the Medium for the 2:30 service.   The Speaker did not show up, it is ten minutes before the service to begin.  Jack looks at the chairperson and says Colleen can do it; and I did.   I have no real memory of that talk other than what other have told me.   The only memory I have from that day was as I stood on the platform all I could think was “OMG! Susan B. Anthony stood here and spoke for women’s rights, my shoes stand where she did now what?”   I had no idea what I was going to say today I believe the woman that put her hand on my shoulder and said “it is ok dear, just begin” was Susan B. Anthony.

Wow!  These shoes I am wearing today stood at the same place Susan B. Anthony did.   Last week while I was being ordained I was wearing them again.  Dan Chesboro just before he ordained me made a comment about them.   At the time it struck me as strange.   As time goes by I get it.   He was pointing me in the direction I needed to focus.

That moment set me up to really explore equal rights, not only the women’s rights but going back to the abolition of slavery.   November 8th is Election day.   I encourage each and everyone one of you to get out and vote.   You still have time; in PA you can register to vote until October 11th and in NY you have until October 14th.

So for you that are frustrated by the current noise; and the emphasis is on noise, each and every vote matters.  I am not telling you who to vote for.   What I want is you to respect the efforts of these people that fought for our right to vote.   And if you think your ONE vote doesn’t matter I want you to think about this:
This is a generational problem, not the biological (parent, child, grandchild) but a Cultural generational problem.   In this room I don’t think we have anyone that came of age during WWI that was the lost generation.   The end of the Edwardian period of history.  The next generation was those that came of age during the depression we call them the greatest generation.   The generation after that was the silent generation which was the late 1920’s to the mid to late 1940’s.   The Baby boomers followed and they are characterized between 1946-1964.
These generations are the ones that fought for the rights.   The following generations are the beneficiaries of these struggles.   My generation GenX 1965-1976, Millennials 1977-1998 and the youngest members of this congregation the iGeneration born after 1999.
Let me give you historical perceptive, the following rights were gained:

Pretty amazing the rights we have towards equal rights.   What if Coretta Scott King had discouraged her husband Martin all those years ago from going to Washington and he had not given the “I have a dream” speech?   What if Susan B. Anthony decided it was not her business to fight for the rights of women?

We owe it to those that fought for these rights to vote.  Be part of the process.

Pretty powerful right?   These are examples of women affecting women.   There are women around the world that are fighting for the basic rights that we have.   Equality.   There is a rebirth of the new Divine Feminine Energy.   To be present in the moment.  That there is interconnections and that everything affects the whole.   It is time we pay attention.

So on November 8th please go out and vote.  Learn about the candidates and make the best decision you can based on the information you have.   Vote not only for yourself, but to honor those that have fought for your right to do so and for those that still aspire to have that right.  In closing I want you to think about this quote from John Quincy Adams:

Always vote for principle, though you may vote alone,
and you may cherish the sweetest reflection that your vote is never lost.

Removing negative energy from a space

Do you ever just daydream?

Memorial Day – Remember those that died in service

Weekly Affirmation – Only One that I need to Impress